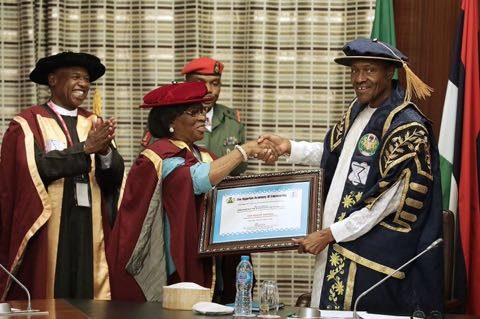 The investiture ceremony held at the State House on 29th November, 2016, and was carried out by the 9th President of the Academy, Engr (Mrs) Joanna Olu Maduka MFR, and the Technical Secretary of Nigerian Academy of Engineering Engr. I.K. Inuwa OFR.

President Buhari during his speech said his administration will heavily utilize talents and skills of local engineers to rebuild ailing infrastructure across the country, describing the engineers as ‘‘competent and cost effective.’’

He added that the well-trained and highly experienced engineers had contributed immensely to the infrastructural development of the country, and they remain indispensable. He also said both military and civilian administrations over the years depended on Nigerian engineers for designs and constructions across the country. ‘‘By insisting that we must be cost effective in building infrastructure, we will utilize Nigerian engineers. I respect them a lot, and I know it takes time to be trained as an engineer,’’ he said.

The President noted that local engineers contributed more than 90 percent to the design and realization of two refineries, 2,500 pipelines and 20 depots in the country during his tenure as Minister of Petroleum in the mid-1970s, adding that the success of the Petroleum Trust Fund was largely hinged on their skills. ‘‘Somehow, every time and anywhere I have served in this country, we found it cost effective to use Nigerian engineers, and we relied on their capacity to understudy, learn and deliver.

It was established as a non-profit and non-governmental institution for the promotion of excellence in engineering training and practice to ensure the technological growth of Nigeria.

The Academy is a national “Think Tank” for Engineering and Technology that provides leadership in national engineering and technological issues by conducting studies and research on relevant issues and making inputs to developmental policies at the highest possible level.