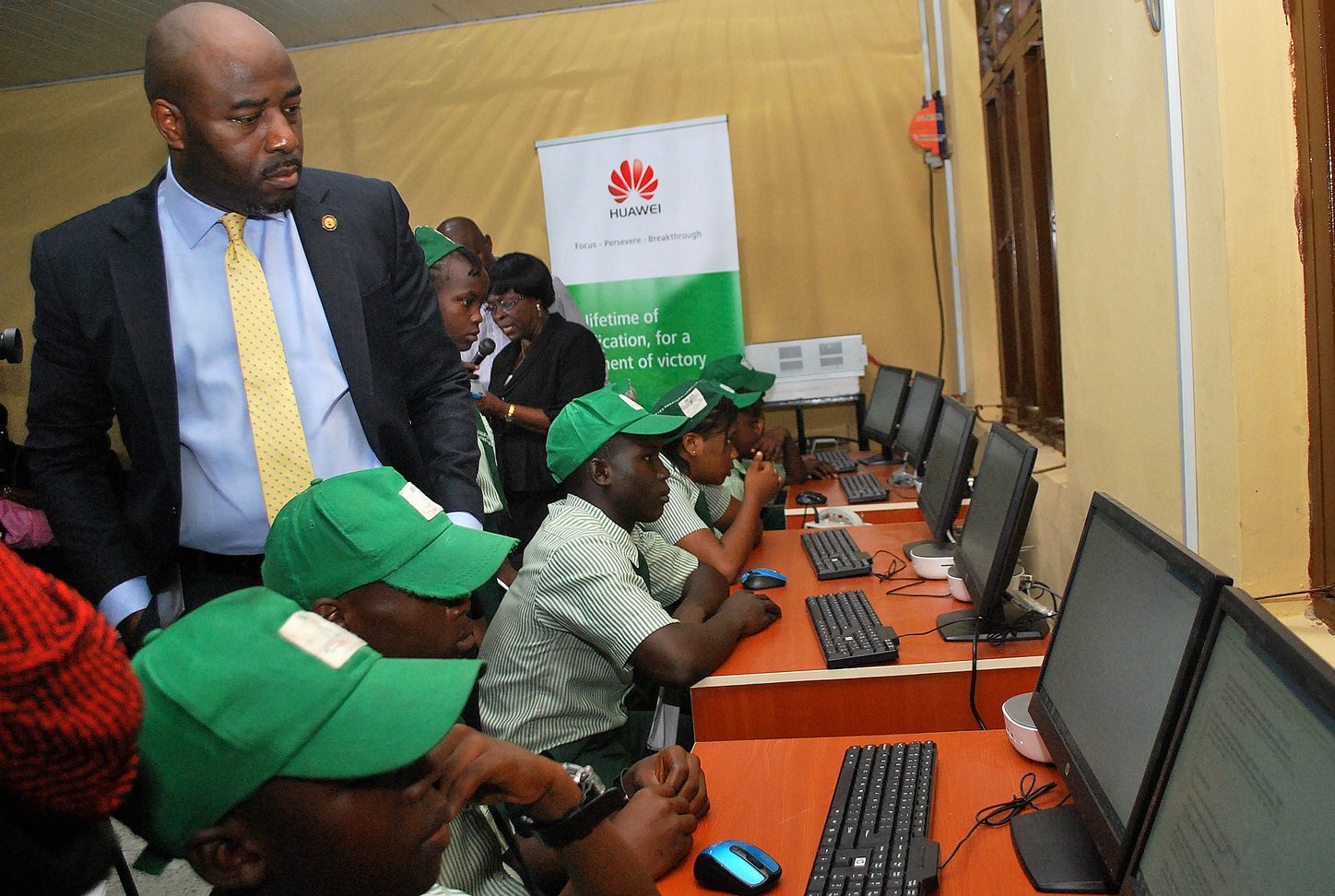 On the 1st of November 2016, Huawei Technologies Nigeria Limited made history in Lagos by commissioning the first solar powered ICT centre in a Lagos public school. The lucky beneficiary school was the Wahab Folawiyo Junior Secondary School on the outskirts of Ikoyi Lagos.

The project was developed under the Lagos State government (LASG) “Project 350”, a private-sector driven initiative to build libraries and ICT centres in secondary schools across the State. The Project 350 initiative also involves the creation of online libraries. …was attended by officials of the Lagos State government, Huawei executives, and members of FOTE. The Lagos State Governor, Mr. Akin Ambode was represented by his Special Adviser on Education, Obafela Bank-Olemoh.  Speaking, the special Adviser said the libraries will collectively serve as an Education Portal. The libraries will also serve as repositories of knowledge in the state.

According to him, the governors vision was to transform Lagos into the most technologically advanced state in the country.

To further buttress this vision, the ICT centres and digital libraries currently under development around the state will be used as training hubs for teaching software coding to Lagos state students.

As the biggest ICT company in the world, and a major player in the ICT sector in Nigeria, Huawei has plugged into the ICT vision of Governor Ambode. As a result, Huawei has identified several secondary and tertiary schools around Lagos where they will either upgrade existing ICT centres, or develop new ones from scratch. Huawei have defined their corporate responsibility very succinctly. The ICT giants wish to improve the lives of people, especially women and children in their immediate operating environment. And one of the ways to do this is by educating the youths and improving access to information.

It is therefore propitious that FOTE is able to partner with Huawei in achieving this joint vision. In addition to ultimately improving the lives of the children, ICT has become an invaluable tool in the efficient management of the environment. These books were carefully selected based on the state’s curriculum.

An interesting aspect of the digital library involved the use of FOTE-recommended HP pavilion mini CPUs. These diminutive devices perfectly replace the traditional CPUs which use up significantly more energy. In spite of their size, the minis were however configured to specifications suitable for school use.

The Project 350 is a laudable plan by the Lagos State government. When juxtaposed with the directive of the State’s education ministry to teach mandarin in all Lagos state primary schools, it becomes easy to envisage the key role Huawei will play in Lagos state going forward.

This seamless partnership can only bode well for Ambode and the future generations of Lagos state children.

We at FOTE are proud to be a part of this historic initiative. 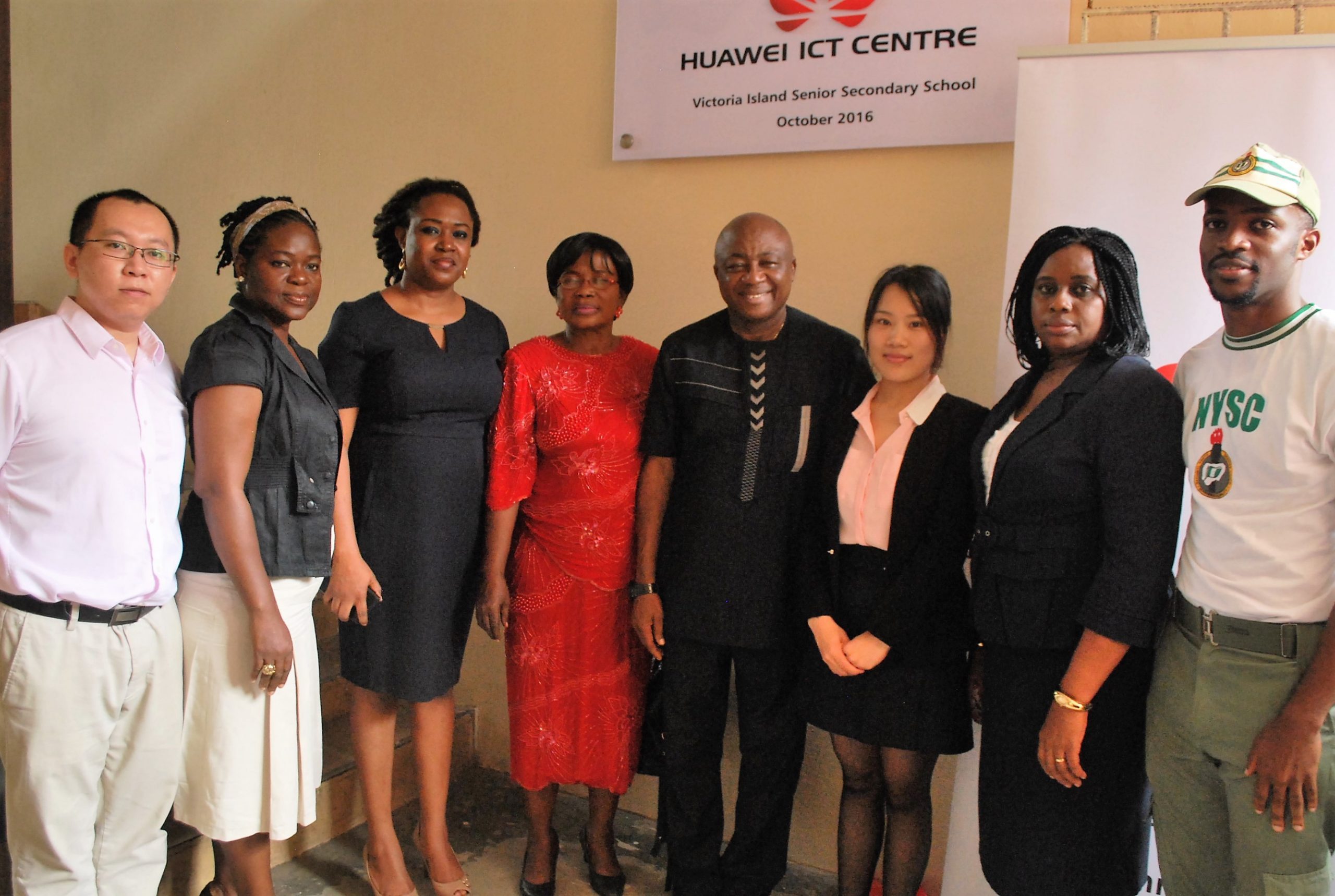 An enterprising youth corper Ebube Oti, has successfully initiated an ICT project in a Lagos State Secondary School. Ebube was able to involve ICT giants, Huawei Technologies in sponsoring the full rehabilitation of a computer centre in the school. Huawei completed the centre with 15 desktop systems, a projector system, and split air conditioning system.

…who is looking to make Lagos State the IT hub of the country. To achieve this, the governor is looking to build ICT centres around the state. He is also refurbishing and upgrading existing centres.

According to the governor, software coding will be taught to students from junior secondary level as part of the school’s curriculum. The hope is that the initiative will give Lagos students access to the world of information technology. It should also broaden the horizon of the students, and improve their employment and entrepreneurship opportunities in the future.

Huawei’s use of cloud technology and wireless connectivity also means that the impact of ICT on the environment is increasingly positive. And if students can be taught about the workings of computers and computer equipment from an early age, they would know to manage ICT systems better.

Therefore, we envisage a situation where the increase in ICT centres around Lagos should reduce the use of paper and plastics, and lead to more efficient outcomes. Interestingly, Huawei has built the use of solar energy into its upcoming rehabilitation projects. This should further reduce the use of carbon fuels at the centres.

Just as importantly, the development of ICT centres will lead to increased access to useful knowledge on environment care. The digital libraries, which make up the most important aspect of the projects, will open up a whole new world of learning to the students.

And so, it is easy to imagine that given the new opportunities on offer, young Nigerian students can start to innovate along the lines of environmental protection and many other spheres of modern living.

The possibilities are endless.